Ranking the top College and University teams in Canada

A national ranking of Canadian college and university baseball teams

What is the top college or university baseball team in Canada?

Unfortunately, unlike US college baseball competition under the auspices of the NCAA, NCJAA or the NAIA, Canadian college and university baseball is in no position to declare a bona fide national champion.

As we have discussed elsewhere, the reason for this lack of coordination is attributable to baseball’s very recent appearance on the radar of official university and college conference organizations such as the OUA and the Ontario Colleges Athletic Association (OCAA) and the general relegation of baseball to second-tier funding by the vast majority of participating universities and colleges. Associated with this second-tier (often referred to as ‘club’) status are the very real bureaucratic impediments that are imposed on university and college baseball conferences that, to date, do not have Provincial Sport Organization (PSO) or National Sport Organization (NSO) membership.

This lack of cohesion has therefore made identifying the best college or university team in Canada a matter of speculation, including our own calculated rankings for hypothetical national championships since 2016, aggregated rankings posted by informed observers, localized conference strength comparisons, impressionistic rankings by the Canadian Baseball Guru on social media, or ad hoc tournaments that declare national “invitational” champions.

While use of the terms college and university are generally interchangeable in the US, the distinction in Canada is important. University (with only a few of exceptions) describes four-year bachelor degree programs, and the term college generally describes two-year diploma programs. Unlike the US, where NCJAA or “junior college” teams rarely play NCAA teams, in Canada there are two conferences that house both four-year and two-year schools (ACBA and CCBC), playing head-to head for a conference championship. Where universities and colleges do not play in the same conference, it is quite common for them to play exhibition games (as in the case of some OCAA and OUA teams).

Despite this state of affairs, or perhaps partly because of it, we have demonstrated that by using the established metric of the Rating Percentage Index (RPI), it is indeed possible to reliably rank Canadian university baseball teams. In our previous ranking, however, we did not incorporate western university teams (some CCBC), nor did we include Canadian college programs (OCAA, RSEQ, one ACBA team and some CCBC teams) – omissions we now seek to rectify.

What we offer in this article, therefore, is the most inclusive and up-to-date ranking of both college and university baseball programs across Canada.

We use all available game data (N= 458) culled from GameChanger, Pointstreak, ACBA, CCBC and RSEQ, and OUA Presto results from the 2019 season that includes all available inter-conference (n=79), regular season (n=322) and playoff (n=57) scores. Given cancellations due to the pandemic, these are the most recent results available.

The completeness of our data set makes it possible to establish a nexus of schedule linking up all teams in our analysis by no more than two degrees of separation. The 2019 National College Invitational and the 2019 Canadian University National Invitational Baseball Tournament proved particularly pivotal in this regard. These two tournaments, when combined, linked teams from as far east as Charlottetown, PEI (Holland College) to as far west as Kamloops, BC (Thompson Rivers) in the process also linking central Canadian (OUA, OCAA), Atlantic (ACBA) and Quebec (RSEQ, Independent) teams.

As a result, it is now possible to rank all teams seriatim from number one through 43 given tournament, intra- and inter-conference play between college and university baseball programs. Nonetheless, we choose to adhere to established convention and separate rankings by national academic accreditation. Two-year colleges are members of Canadian Colleges and Institutes while four-year universities are members of Universities Canada.

Where teams are not formally constituted programs of a respective university or college (ie. Prairie Baseball Academy and Edmonton Collegiate of the CCBC) they were omitted from the final rankings since no university or college administrator can certify their players’ eligibility. Moreover, teams that did not play in a Canadian conference (ie. University of British Columbia, NAIA) were also not included.

As noted, we adopt the most widely used statistical method for ranking teams playing a limited schedule across a large geographic area: the Rating Percentage Index (RPI). The RPI is relied upon by the NCAA and has been utilized to assess the comparative strength of teams that do not play each other. In particular, the RPI is used by the NCAA for baseball to judge annual seeding for regional and super-regional qualifiers toward the College World Series.

The underlying premise of the RPI is that, in the absence of head-to-head competition, there is no more objective way to rank teams since wins, losses, or points are always regional and conference-specific. Teams may benefit from inflated records if playing in a weaker conference. The RPI formula, on the other hand, relies on the strength of a team’s schedule in order to judge their relative performance.

The formula for RPI is as follows:

Thus, a team’s WP is the percentage of games that a team wins, calculated by dividing the total team wins by total games played.

Note that WP accounts for only 25% of the RPI calculation, which is one reason some analysts dislike the RPI formula. They argue it places too much weight on opposition record. Yet, this is precisely what the RPI was intended to do: offset regional variations in conference strength and WP.

In the case of our analysis, the expansion of the total number of games in our data set through the inclusion of college teams significantly altered our previously posted university rankings, especially at the middle to lower ranks. There is a noticeable domino effect that kicks in as soon as the pool of teams included expands, affecting every other team’s OWP and OOWP and thereby creating significant movement in the university rankings.

The results from the Canadian college rankings (Table 1) may be somewhat surprising to teams from the OCAA, where the well regarded conference placed only one team (Durham) in the top 5, though they did populate four of the top 10 spots. The top Canadian college team according to our RPI calculations for 2019 was Drummondville, followed closely by Okanagan. Drummondville won the RSEQ title in 2019 and Okanagan was a first-place finisher in the CCBC alongside number 3 ranked Thompson Rivers.

As a conference, the RSEQ did not fare as well as Drummondville which gained significant RPI increases by playing challenging non-conference competition. Thompson Rivers could have overtaken conference rival Okanagan had they a better showing at the 2019 National College Invitational, losing to Fanshawe in the bronze medal game. Similarly, while Fraser Valley won the 2019 CCBC championship, they did not test themselves against stiffer competition (OWP) when compared to Thompson Rivers and ended up ranked 8th overall.

The same strength of schedule effect applies to Holland College, the only college team from the ACBA conference, which finished in the top 4 largely on the basis of an impressive WP against their conference competitors but also benefiting from the second highest OOWP and strong OWP by virtue of their participation in the 2019 National College Invitational against other top teams. 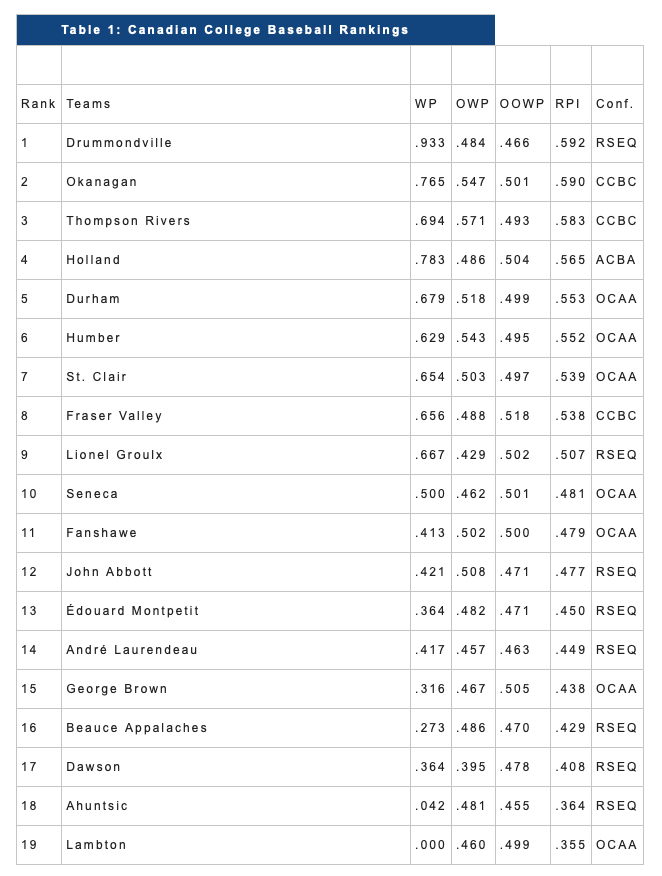 Unlike their provincial college cousins, the OUA seems to have dominated the top of the 2019 rankings (Table 2). Laurier, the 2019 OUA champion finished first overall followed by Guelph , the 2019 Canadian University National Invitational Baseball Tournament winner. OUA conference foes Western (despite a limited schedule) and McMaster finished third and fourth ahead of former CCBA champs and current independent team McGill rounding out the top 5.

While Windsor slots into sixth place it is important to note this is on the basis of only four games played at the OUA championship which gave them a .750 WP before losing to Carleton in the semi-finals. Windsor plays its regular season in the NCBA which is a US club association across the Detroit border for which we do not include results. The team that eliminated Windsor, Carleton University, went on to take the silver at the OUA championships but their late-season heroics could not undo a lackluster record and they eventually ended up 17th out of 24 teams.

The highest ranking Atlantic (ACBA) university team was Acadia, ranked seventh in Canada, largely by way of receiving an OOWP boost for attending the Canadian University National Invitational. By way of comparison, despite winning the 2019 ACBA championship tournament and defeating Acadia in the final, UNB ranked ninth overall. Again, where teams play against tougher competition, as in the case of Holland and Drummondville in the college ranks, their strength of schedule can translate into RPI gains. 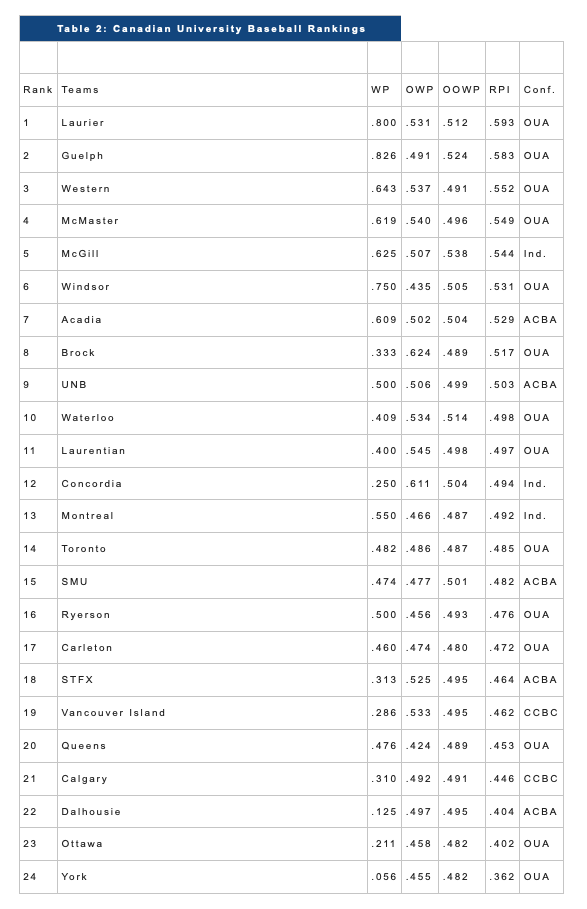 Generally speaking, the RPI benefits teams that play tougher non-conference competitors which can act as an incentive for programs to venture outside their conference schedule, in the process adding to a more robust set of linkages for the RPI calculations as a whole.

The potential benefit of RPI rankings

It is not altogether clear how helpful RPI rankings can be for advancing the cause for unified national baseball championships for either colleges or universities in Canada. After all, most would agree that the best method for making such determinations would be head-to-head qualifiers leading to some path akin to the NCAA DI’s “Road to Omaha.” Yet, even in the case of regional, and super-regional qualifiers, the NCAA still relies heavily on the RPI and its component calculations to finalize the 64 teams that will make up the field.

In the Canadian context, RPI rankings could make a contribution to future ‘invitationals,’ calculating the strength and, by implication, the legitimacy of potential invites to these tournaments. For programs that value their national ranking, there is strong incentive to seek out non-conference competition which can only be positive for the development of Canadian college and university baseball.

More importantly, however, what we have demonstrated here is that it is indeed possible to reliably rank college and university baseball teams across Canada using RPI. There are enough data points because the established practice of inter-conference and college versus university play has eliminated scheduling silos. As we have noted, a nexus of schedule links all teams in our analysis by no more than two degrees of separation.

So, when the time comes to assess what role, if any, RPI can play in national championship seeding we are well positioned and on solid statistical ground to make use of such rankings. In the absence of bona fide national championships, however, the RPI can at least spark interest and debate fuelling the desire to create a clear path to finally answer the question: what is the best college or university baseball team in Canada?