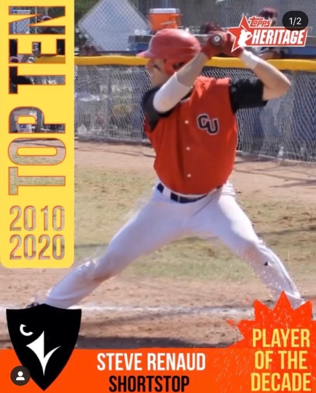 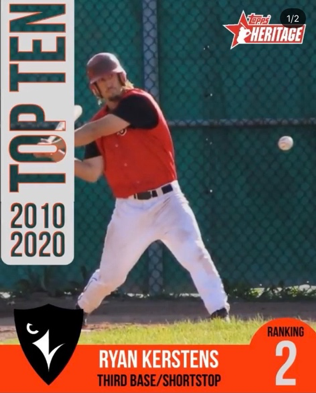 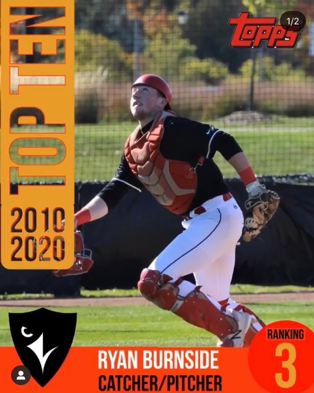 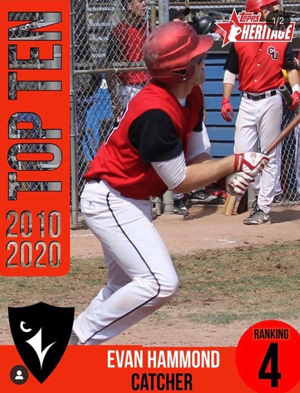 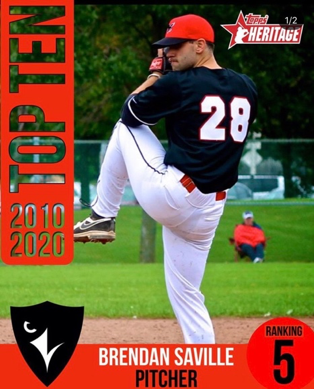 In anticipation of the 2020 New Year, the Carleton Ravens baseball staff convened current and former coaches to rank the top ten players of the decade. The rankings were released on the team’s social media accounts (Twitter and Instagram) culminating in the announcement of the decade’s #1 player on New Year’s eve. The two stage voting process yielded some obvious, and not-so obvious results that sparked discussion among current and former players.

Regardless of where certain players ended up, what became abundantly clear to all was that Ravens baseball has been home to some truly impressive student-athletes. Below is a recap of the ranking along with associated card captions. 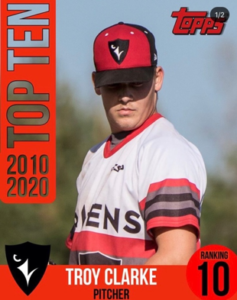 10. Over the past four seasons Troy Clarke has steadily established himself as a premier pitcher in Canadian University baseball. An aggressive strike thrower, Clarke has consistently ranked among league leaders in strikeouts (SO) and innings pitched (IP). In both 2018 and 2019 Clarke played a key role in the Ravens’ post-season success garnering All-Star OUA tournament and coaches’ poll recognitions. 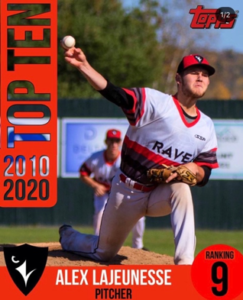 9. A consistent earned run average (ERA) leader, the New Hampshire native was a dominant starter in the CCBA from 2016-2018 racking up league All-Star and team pitcher of the year honours. In 2017, Lajeunesse missed most of the regular season before throwing one of the most memorable games in Ravens history in a two hit complete game 1-0 victory over Concordia in the Canadian Collegiate Baseball Associations (CCBA) national semi-finals. 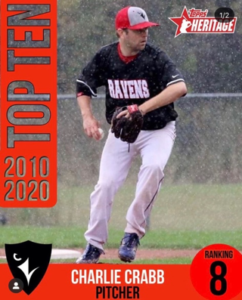 8. Though stats from the early part of the decade are somewhat sparse, Charlie Crabb is widely regarded as the Ravens’ all-time IP and appearance record-holder. A work horse hurler, “Chuck’s” uncanny longevity resulted in the first eligibility rule introduced by the now defunct CIBA/CCBA: the “Charlie Crab rule,” which imposed limits on years of play. Crabb was instrumental in the Ravens’ improbably 2011 playoff run, tossing a one-hit masterpiece in the 3rd and deciding game vs. Concordia and leading Carleton to its first Conference title. Crabb went on to be named 2011 Player of the Year and 2013 CIBA All-Canadian Pitcher. 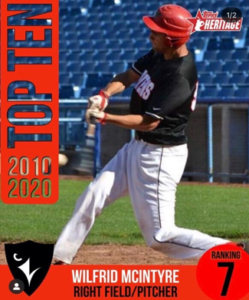 7. Wilfrid McIntyre, a SUNY Canton alumnus, was a standout on the mound and in the batter’s bpx. he is the highest ranked outfielder of the decade, 2015 home-run leader, CCBA conference pitcher of the year and CCBA nationals first team All-Star. Will “The Thrill” McIntyre is most often remembered for hitting a game winning 3-run HR against Saint Mary’s in the 2015 CCBA nationals. The dramatic, clutch blast moved Carleton into the national semi-finals. 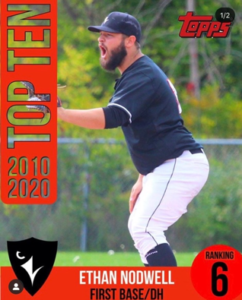 6. Returning from West Texas DI NCJAA baseball, Ethan. Nodwell was the Ravens’ most impressive hitter from 2014-2016 when he twice led the CCBA and on-base plus slugging (OPS). In 2016 he led all hitters in batting average and was named CCBA Hitter of the Year, national tournament All-Star, and won team honours for both Hitter of the Year and MVP. The burly left-handed hitter ranks among the most dangerous to ever wear a Ravens uniform. 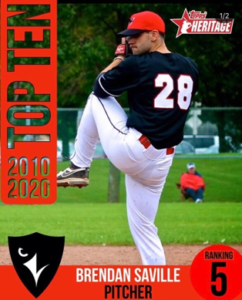 5. Brandon Saville is widely considered the most dominant pitcher to ever wear a Ravens jersey. Between 2013-2014 Saville started in some of Carleton’s most memorable pitching performances including a narrow 2-1, one-hit complete game loss at the 2013 CCBA nationals vs. Windsor and a record-setting 20 strikeout complete game vs. Concordia in 2014. In another start vs. Ottawa in the same year he struck out 16 batters. Not surprisingly, the Niagara CC graduate was named the CCBA’s Pitcher of the Year despite missing the playoffs after damaging his knee on a play at the plate late in the season. A true Raven, Saville went on to join the staff as a pitching coach. 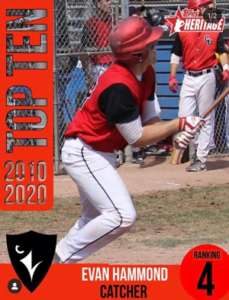 4. Evan Hammond backstopped one of the most impressive Ravens pitching staffs of the decade. Arriving after stints at Monroe CC and SUNY Canton, “Hammer” made an immediate impact in 2011, leading CIBA’s Northern conference batting average, RBIs and HRs and leasing Carleton to a Conference title. The slugging catcher is considered one of the top Ravens hitters of all time and was named All-Canadian All-Star in 2013 after finishing with a remarkable .457 batting average. 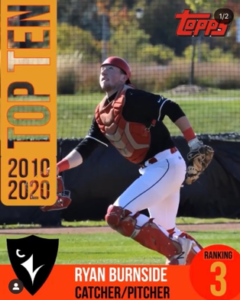 3. By the time Ryan Burnside entered his senior year at Carleton he had already established himself as the top power hitter in Canadian university baseball. A two-time CCBA All-Canadian, he was 2018 playoff batting, HR, and RBI leader, as well as team MVP. Burnside helped lead the Ravens to an OUA Silver Medal in 2019, hitting a game-tying 2-run HR vs. Laurier that sparked an historic playoff drive. He was awarded OUA Silver Slugger, catcher of the year and championship tournament co-MVP. 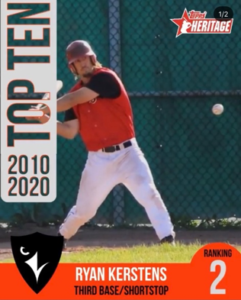 2. In the early decade Ryan Kerstens was arguably the most dominant infielder in Canadian University baseball. Arriving from Campbellsville University (NAIA) in 2009, Kerstens took the CIBA by storm. He consistently hit over .400, for which he was awarded league Hitter of the Year in 2011, and was twice named All-Canadian and helped lead Carleton to a Conference title. A leader on the field, Kersten’s performance was recognized with a team Rookie of the Year trophy, a Hitter of the Year award and four consecutive team MVP titles from 2009-2012. 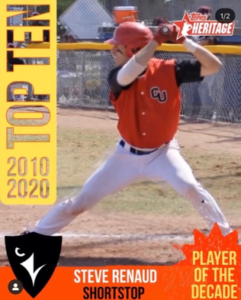 1. Steve Renaud is the 2010’s Raven’s baseball player of the decade. He dominated the diamond with the glove and the bat from 2011-2013, playing an integral role in Carleton’s 2011 conference championship and 2013 CIBA Northern Conference Hitter of the Year, All-Canadian 1st team All-Star, and national tournament shortstop. In that remarkable 2013 season, Renaud never struck out, hit .408 and in a deciding conference game vs. Ottawa, hit 2 HRs to spark Carleton’s push to the national championship. 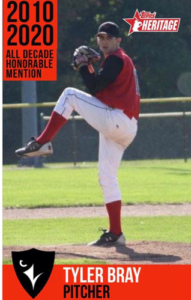 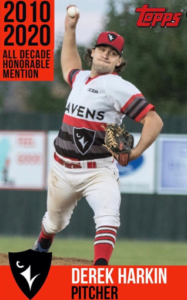 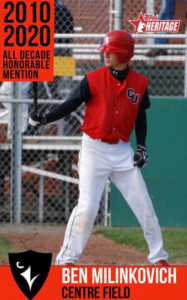 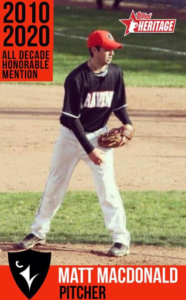 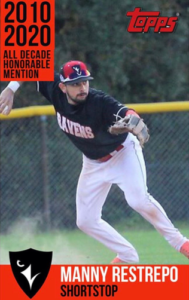 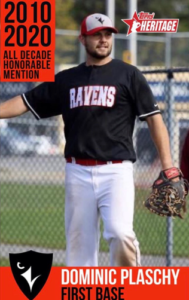